Four separate 10-storey blocks, rising from a common ground floor area above basement car parking, required to be joined at
two locations at the ninth and tenth floor levels with concrete slab sky bridges. The challenge was to support the two bridging
slabs, initially for casting the ninth floor bridge and later on as a back prop to restrain the loads from the tenth floor above.

Each bridge support had a plan area of approximately 360m2 and was 43m high – this equated to a volume of support for each bridge of around 15,480m3. The main challenge for the contractor was availability of labour and a tight deadline.

Owing to Titan’s unique nodal plane connections and flange vertical connections, the team in Qatar were able to gang the support into 27 separate crane-handled units. These were assembled, at ground level in complete safety, with only four riggers working at height connecting the units at any one time – this method of assembly massively reduces operative’s exposure to risk of falling.

Alternative nodal steel systems commonly used in the region would require a far larger number of components and therefore
many more operatives.

There are several ways of estimating erection/production times but at a conservative estimate based on minutes per item per height, alternative systems would require a minimum of 50 men for 18 working days. The reality at site was that with very limited use of the site crane, only ten men were able to assemble and erect each of the two structures in approximately three days.

The customer saw and greatly appreciated the time and labour savings that were promised; because of this a very strong working relationship for future projects has begun. 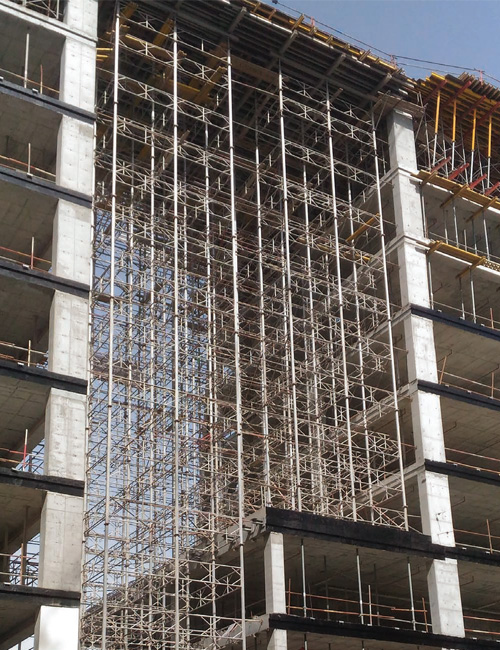